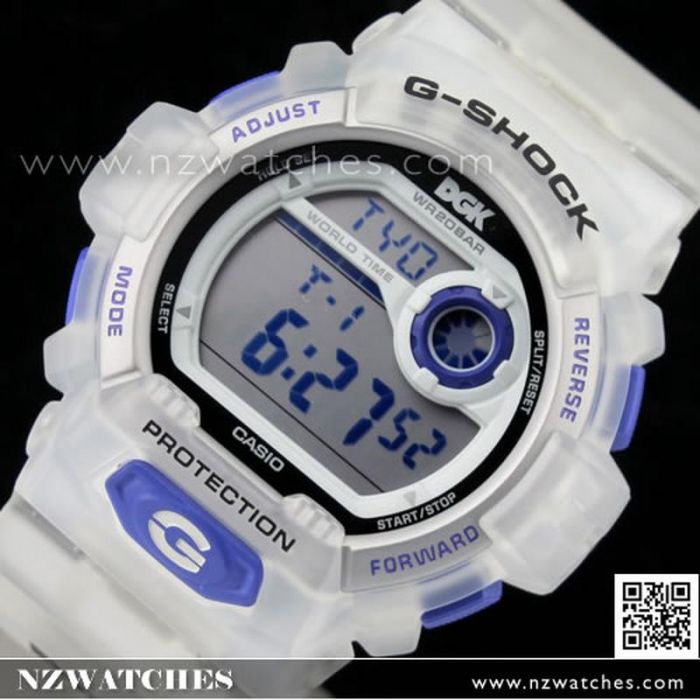 Skip to the beginning of the images gallery

Secured and trusted checkout with

This second collaboration between G-SHOCK and DGK Skateboards is a really special one because it also marks G-SHOCK's 30th birthday. It combines G-SHOCK attitude with the DGK spirit of persevering against all odds to achieve great success.

The base model is the G-8900, which features 200-meter water resistance plus an impressive collection of features and functions. Style-wise, the watch has a transparent case and band accented by DGK-signature purple buttons.

DGK logos are included on the dial, band, and back cover, along with DGK-founder Stevie Williams' signature. This watch comes in a special package.

Originally from Philadelphia, Stevie Williams grew up skating Love Park. He and his friends were referred to as Dirty Ghetto Kids by the other skaters who frequented the plaza, obviously the name stuck and Stevie was able to turn it into something positive when he formed DGK in 2002. Stevie’s path to success began after leaving home at the age of 14 to pursue his dream of becoming a professional skateboarder in San Francisco. After navigating a path that was full of twists and turns and ups and downs, Stevie was able to accomplish his goal and is now an icon both in and outside of skateboarding. He currently divides his time between Los Angeles and Atlanta and stays busy skateboarding and running all of his business endeavors.

More Information
Reviews
0
Rating:
0% of 100
Reviews
Write Your Own Review
Only registered users can write reviews. Please Sign in or create an account